Friends fitting in a perfect team 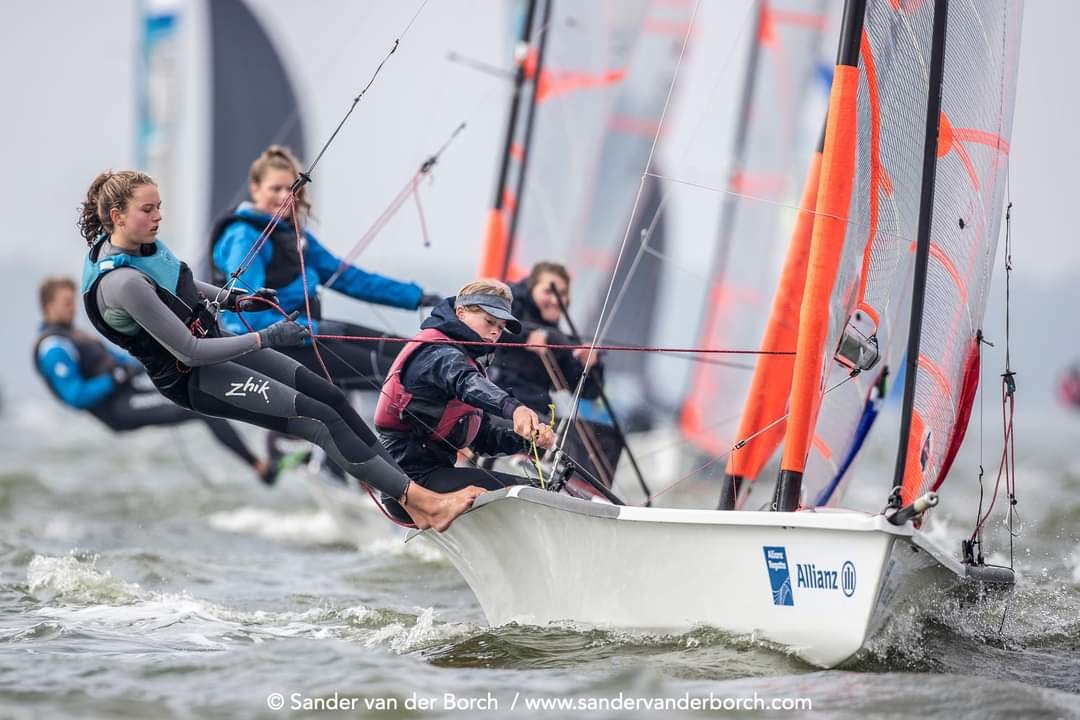 The Allianz Youth World Sailing Championships were high on the bucket list of Jorien Hin (17) and Vera ter Horst (16). Now that the time has come, the two young Dutch sailors are looking forward to an unforgettable experience.

Representing the Netherlands at a Youth World Championship, it is a life long dream of Vera and Jorien. The two childhood friends, who mastered their sailing skills at the same club in Haarlem, teamed up in the 29er about two years ago, after they had said goodbye to the Optimist.

Jorien: “We’ve known each other all our lives, even outside of sailing. We are almost always on the same page, are motivated and complement each other well.”

Shortly after a transition clinic to familiarize themselves with the new boat, the duo already earned a spot in the national squad. From that moment on, Jorien and Vera drew up a plan together. Get better step by step, raise to a higher level and maybe one day come representing the Netherlands at the Olympic Games in the 49er FX.

That journey is also nicely tracked on their own website (hinhorstsailing.nl).

The 29er is a class, says Jorien, that includes everything that stands for the art of sailing. “It’s a cool boat that goes fast. As a sailor you are also physically challenged. That is why fitness and endurance are an important part of our training program. After that, we both love playing on the water with this boat; playing with the wind, water and waves. This is a class in which it is not only important how you handle the boat, but also that you understand the tactical game well. And we are far from finished learning on all fronts.”

The team recently qualified for the Allianz Youth World Sailing Championships at the Dutch Youth Regatta in Workum. That week was not without struggle for them, which the two will remember for a long time. Because of school exams (she passed her exams successfully!) Jorien and therefore also Vera could not train very often in the weeks before. On the last day before the competitions started, they could just get out on the water.

Not all hurdles had been cleared yet by then. A torn tent, a broken jib part, a lost sail found just before the crucial race; the week in Workum was an adventure in itself. “Tough”, Jorien sums it up herself. “I almost forgot, or I have repressed it a bit”, she adds with a laugh.

But all that didn’t stop Jorien and Vera from keeping the focus on their goal. “We had strong winds and that was in our favor. In the end we finished as best Dutch team in our class and our goal was achieved.”

What the two can expect at the Allianz Youth World Sailing Championships is still unknown to Jorien. “We don’t really know how strong the competition will be. But we just have to get the best out of ourselves and then we’ll see which result in the end it will be.”

Jorien sees the fact that the races are sailed in Scheveningen as an advantage. “We trained there more often than the other teams. The current is strong, we are going to study that well, but other teams will do the same.”

One thing is certain for Jorien, because she has heard enough about that. For her and Vera, these Youth World Championships will be an event they will never forget. “This was also my last chance because I will be too old for the next edition. But I’ve heard the stories of many others: this is kind of a once-in-a-lifetime experience that’s really cool, where we race amongst future champions and make friends for life.”