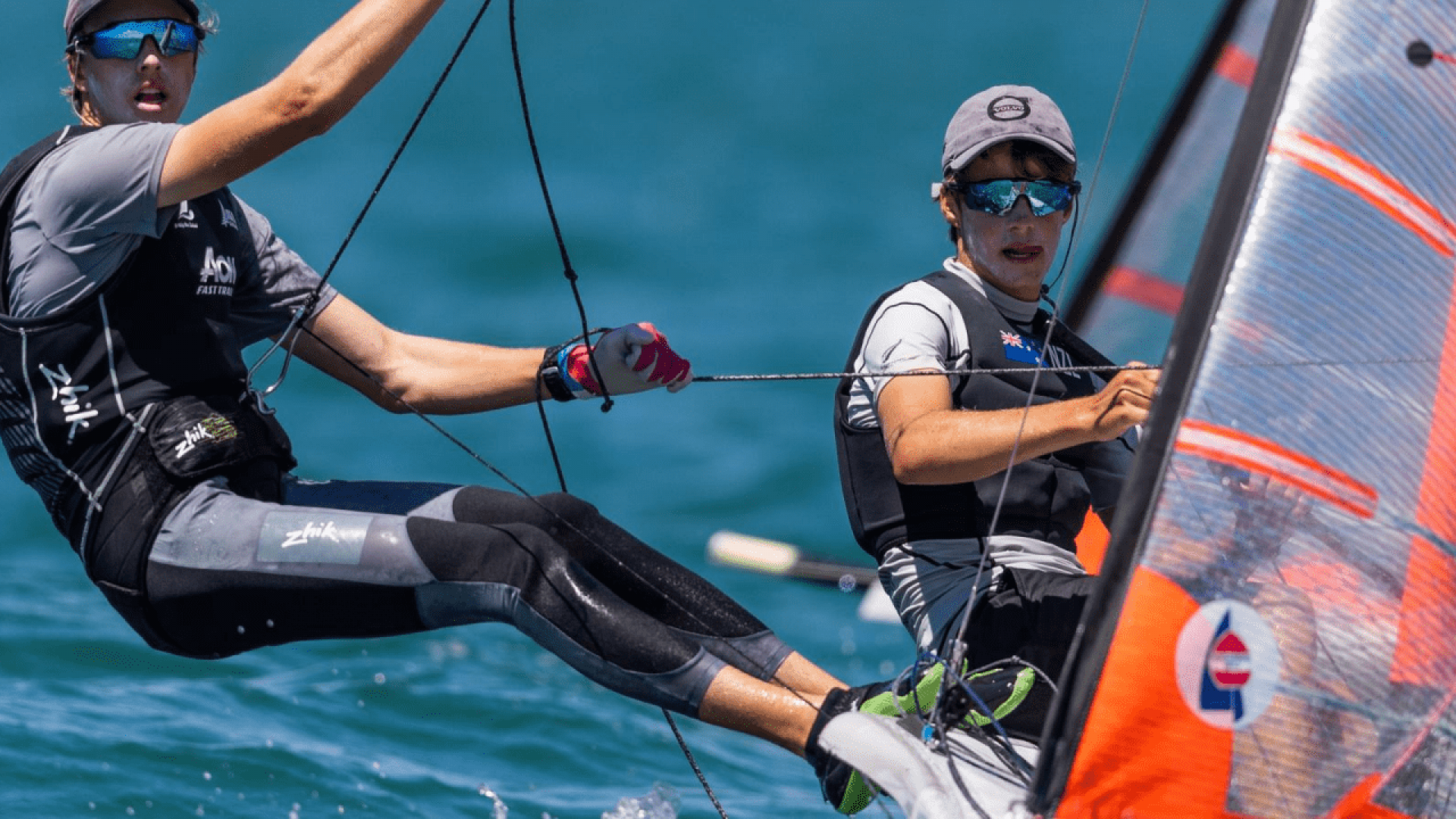 A New Zealand flag looks set to fly at the Youth Sailing World Championships for the first time in three years, following the selection of the NZL Sailing Foundation Youth Team to compete in the Netherlands in July.

A New Zealand team last competed at the youth worlds in Poland in 2019. The 2020 youth worlds in Brazil were cancelled due to Covid-19 and Yachting New Zealand opted out of sending a team to Oman in 2021 due again to Covid and complications around MIQ.

This year’s team was selected following last weekend’s Oceanbridge NZL Sailing Regatta, which also incorporated the youth trials. The winner of each youth class was put forward for nomination to be considered by the New Zealand selectors.

Seb Menzies, who won gold in the boy’s 420 with Blake McGlashan in 2019, is the only sailor selected with previous experience competing at the Youth Sailing World Championships. This time he will compete in the boy’s 29er with George Lee Rush after the pair comfortably finished on top of the standings.

The girl’s 29er combination of Lucy Leith and Lizzie Shapland, along with boy’s ILCA 6 (Laser Radial) winner Caleb Armit, have previously won selection to the NZL Sailing Foundation Youth Team but not competed due to Covid.

For some in the team, this will be their first international competition and the intensity and pressure of the youth trials was a small taste of what they can expect at the youth worlds.

“It sets them up nicely, because that is what the youth worlds is like,” Yachting New Zealand talent development manager Geoff Woolley said. “They have to be totally self-sufficient out on the water and deal with things that come up.

“They came up against some really difficult racing conditions at the Oceanbridge NZL Sailing Regatta – it was hot and the wind and current very tricky – but it was good to see them finally competing again with the pressure on. It was an event that really tested them and people learn so much more when they have to perform under pressure.”

Some of the tightest racing was seen in the boy’s 420 fleet, where the top three combinations pushed each other to the very end. There were also sizeable fleets in the ILCA 6 and 29er.

Yachting New Zealand are in the process of developing a plan to best prepare the NZL Sailing Foundation Youth Team for the youth worlds, which will see a combination of domestic camps and AON youth clinics as well as guidance on what international events sailors should target before competing in the Netherlands.

The Allianz Youth Sailing World Championships is the pinnacle event for youth sailors and runs along similar lines to the Olympics, in which only one entry from each country is selected to compete in each class.

As many as 450 sailors from 69 countries have confirmed their entry this time around and, for the first time, New Zealand will compete in kitefoiling and windfoiling which are also on the Olympic programme for the 2024 Paris Games.

New Zealand has a proud history of success at the youth worlds, having won 55 medals since the first event in 1971, and past notable winners include Alex Maloney, Blair Tuke, Chris Dickson, Jo Aleh, Russell Coutts, Dean Barker and Stuart Bannatyne.

The last was won by Menzies and McGlashan in 2019, and Woolley is optimistic some in this year’s team are capable of finishing on the podium.

“We have got a really solid team, with some contenders in there,” Woolley said. “It will be a real test to see how we come out of the international wilderness.

“That will be the hardest part, having not had international competition in big fleets over the last couple of years, but it’s exciting to finally be heading back into that environment.”