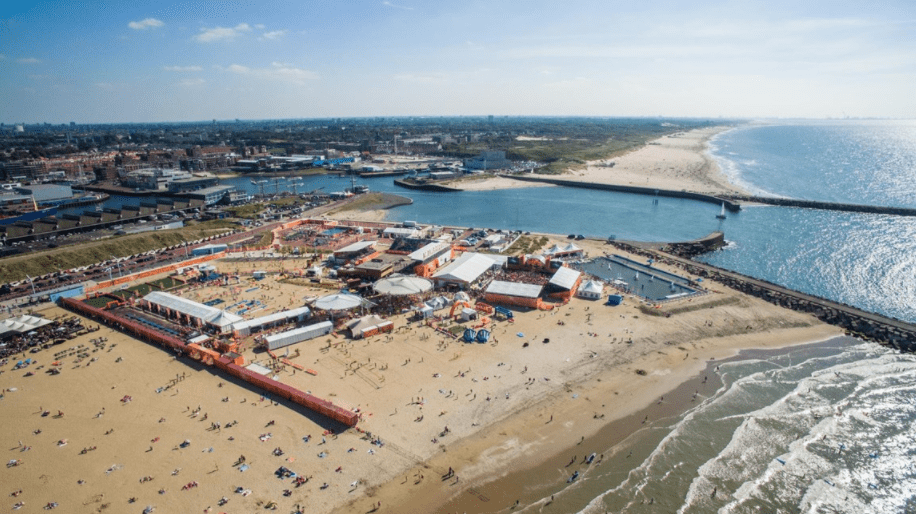 “Every time, I am amazed by the passion and heart for the sport of the huge group of volunteers from the sailing world. That is truly unbelievable.”

Club – in my youth I was a member of Sailing Club Kurenpolder. My parents are still members.
Sailing CV – From the age of 6 until the age of 18, I sailed full speed in the 420. Just before an Olympic campaign I stopped because I wanted to see more of life and the world. Achievements: 1st at the European Championship in Austria, 3rd at the World Championship in Nieuwpoort. 4x Dutch champion in the 420. In those years I often sailed against Lobke Berkhout.
I organised the North Sea Regatta for five years with Edwin Lodder and Frans Sluiters.
In 2015 I was pit stop manager of the Volvo Ocean Race Den Haag together with Edwin Lodder.
In 2017/2018 I was project leader from the Municipality of The Hague for the Ocean Race finish.
In 2023 I will be project manager from the Municipality of The Hague for the Ocean Race stop-over.
Boat – I sail in a canal boat in Amsterdam and live on a houseboat at the Oranjesluizen locks.
Favourite area – Amsterdam canals, Caribbean sea.
Role at the World Cup – Sailing Manager: I am ultimately responsible for everything that happens on the water.

The ‘extra’ year is already over! How is the World Sailing Championship progressing?

Yes, for the organisation of the World Sailing Championship it has been two insane years. Together with the associations, we have now started to work hard and well to get all the competition teams in order.

For the Youth World Sailing Championship we are working on weaving together the competition schedules in a way that we can organise it as efficiently as possible. We have added a number of people to the team in terms of race management so that we can gain some ground.

Clubs – Besides Rob and Remco, seven associations are closely involved in training volunteers to become officials during the World Championship. They ultimately determine who will be on the team, in close consultation with Rob and Remco. Those seven competition teams are:

The teams of these associations are training hard to get ready. This was difficult during corona because many competitions were cancelled, but we are catching up and are now practising as much as possible at winter competitions.

Equipment, jury, safety – Tanja Heijink is busy setting up the whole measuring process. She has to measure and equalise 350 boats at the Youth World Sailing Championship and 900 boats at the World Sailing Championship. That is quite an operation. Hedwich Kuipers of the Watersports Association has been brought in to strengthen the team of judges. Cees Booi is in charge of equipment and Sven Johansson is looking into safety on the water.

Logistics, catering, side events etc. – In addition, there is of course the entire team of TIG Sports (organiser of major international sporting events such as Volvo Ocean Race 2018, Grand Prix 2021) that deals with logistics, catering and communication, hotels, hospitality etc. Ilse Köpping of Watersportverbond organises the side events. And Edwin Lodder is an important advisor on the whole.

Permits – In addition to being an important sponsor, The Hague is an indispensable partner when it comes to logistics, permits and communication.

What do you mainly occupy yourself with?

First, the Youth World Championship is on the programme. What is the difference with the World Sailing Championship?

Logistically, this is one of the biggest sporting events in the world. How are you going to organise that in The Hague/Scheveningen?

Housing 900 boats and getting them in and out of the water in a streamlined way isn’t easy. But of course, we have thought about it carefully, otherwise we would never have taken up the challenge. The most important adjustment that needs to be made at the location is the construction of a slipway. We are currently discussing this with the Ministry of Defence and the Municipality of The Hague. It looks promising. We have also added new classes with IQ foil and Kitefoil. Jumpteam is a great location with great facilities for kiters. That’s a good starting point for this new class.

What are you satisfied with at the moment?

Logistically we are currently very busy to make sure that everything fits, that agreements are made with all the suppliers and that the permit process is completed. The safety team is making a plan under the leadership of Sven Johansson. The sales team is working hard to connect parties to the event to ensure that it is and remains financially feasible. In addition, the race teams are working well and we have a pleasant cooperation with World Sailing. In fact, on every level the ball is rolling and I am very satisfied with that.

What are the focus points?

We are busy organising the biggest sailing event in the world with a lot of people. Everything must eventually come together. Now everyone is still busy on their own island. That’s good, but it has to come together eventually. We’ll be working hard on that in the next eighteen months. That is my most important task. And it is very important that we can all make sea miles. Competitions must therefore continue with the latest corona developments.

What is your goal, when is the (Youth) World Sailing Championship successful for you?

Volunteers – If all the volunteers and the whole team working on this had a fantastic time leading up to and during the event, learned a lot and we as the Netherlands were able to show that we can organise this. Many clubs will participate because of what the event will leave behind and what everyone will benefit from: making competitive sport better and getting more people into the sport.

World Sailing Championship – If we have put on the best quality races for the sailors, which are also a good preparation for Paris 2024.
If we have been able to bring sailing closer to the people by holding the races as close to the coast as possible and have been able to showcase it beautifully.
If we have managed to put The Hague on the international map.
If we were able to give substance to the sustainability initiative ‘The Future is Water’ of the Watersportverbond, TIG Sports and partner Allianz.

Every time again, I am amazed by the passion and heart for the sport of the huge group of volunteers from the sailing world. They put in so much time and energy, which is truly unbelievable.

In addition, this is an extremely ambitious event. Without a party like TIG Sports, who sticks its’ neck out and dares to do it financially and organisationally, this would never get off the ground in the Netherlands. That is real entrepreneurship, guts and daring. It gives everyone involved a lot of energy. The involvement of the Municipality of The Hague is also very special. They are helping us in various ways to set up this ambitious event properly.