Youth Sailing World Championships: Neck and Neck in the Nacra 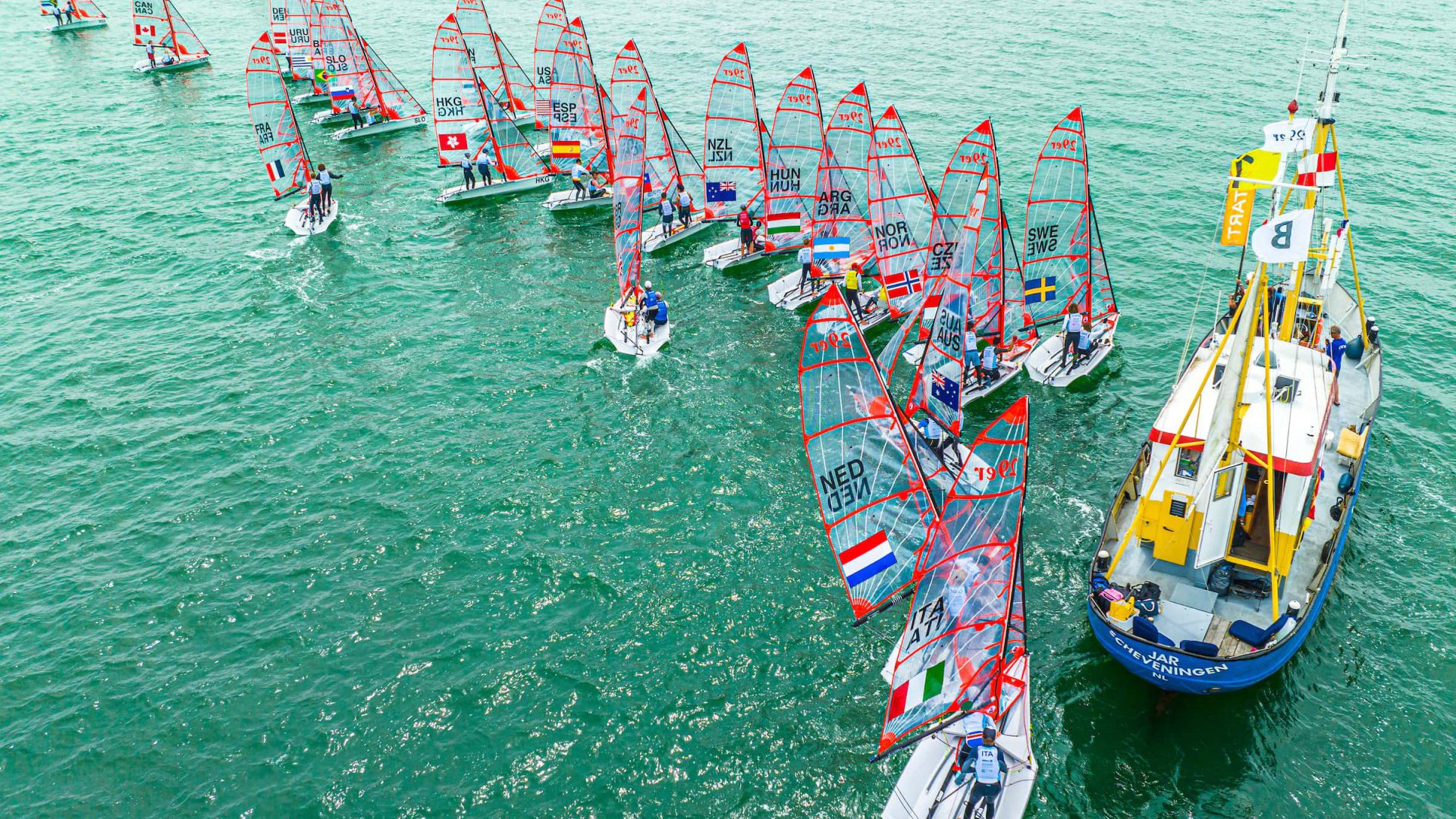 The wind did its best to upset the rhythm of the Allianz Youth World Sailing Championships in The Hague but some sailors still enjoyed some good and challenging competition on day three of the regatta.

The Male/Mixed and Female Two-Person Dinghies – the 420s provided by Nautivela – managed to complete their two scheduled races despite the breeze rarely getting higher than 5 knots.

The German pair of Amelie Wehrle and Amelie Rinn (GER) scored 3,1 from today’s races, a stunning set of results in tricky conditions which moves the Amelies further ahead in the overall standings of the Female 420s. They’re now on 12 points, eight points clear of the second-placed team from Italy, Camilla Michelini and Margherita Bonifaccio (ITA) who are only just ahead of teams from the US Virgin Islands, Japan and Croatia. 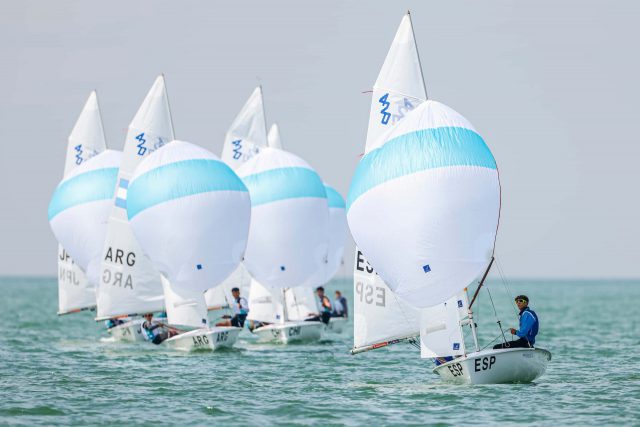 Axel Grandjean and Noemie Fehlmann (SUI) won today’s only race in the Mixed Two Person Multihull, the Nacra 15. This brings the Swiss to equal points with the leaders of the series so far, the brother and sister duo of Daniel and Nora Garcia de la Casa (ESP). The Barcelona siblings are enjoying their time at the Youth Worlds, as well as enjoying each other’s company on the catamaran. “We have only been sailing the Nacra 15 a few weeks,” said Nora, aged 17. “Daniel is 15 and he normally sails an Optimist. Usually I am steering a 420 so crewing in the Nacra is a very different challenge for me.”

The Spanish have been going fast in the light winds this week, helped by the fact that their combined weight is around 100kg. “I think most crews are more like 120kg total,” said Daniel, “so that helps us in the light winds.” Wednesday is forecast for breeze around 13 knots so it could be a full power day to really test the Spanish siblings. If Nora was concerned, she didn’t show it. “We are going out to have fun, and that is the most important thing for us. We sail well when we’re having fun.”

The same emphasis on fun for the British team in the Male Skiff 29er. Santiago Sesto Cosby and Leo Wilkinson (GBR) are lying in third overall and as long as they keep on singing while they sail, they have a shot at winning. “I’m pretty much singing a tune the whole time we’re racing,” laughs Cosby. “It can be anything that’s good. Pompeii by Bastille, it’s an oldie but goodie.”

When Wilkinson is asked if he finds his helmsman’s warbling off-putting while trying to concentrate on sailing the 29er, quite the opposite. “No, if he stops singing you know it’s gone bad,” says Wilkinson. “He’s my backing track,” Cosby interjects. That said, the 29er duo didn’t step up to the karaoke mic on the previous evening at the loud and raucously entertaining Bingo Competition. “Our kiteboarder Mattia [Maini], he was the star act,” said Wilkinson, proud that Maini was flying the flag for Great Britain at the Youth Worlds’ answer to the Eurovision Song Contest.

As to the serious business of winning yacht races, it was the recently crowned 29er European champions, George Lee Rush and Seb Menzies (NZL), who won the only race of the day. This puts the Kiwis in second place overall, still with an 8 point gap to the yellow bibbed team from Argentina, Maximo Videla and Tadeo Funes de Rioja. 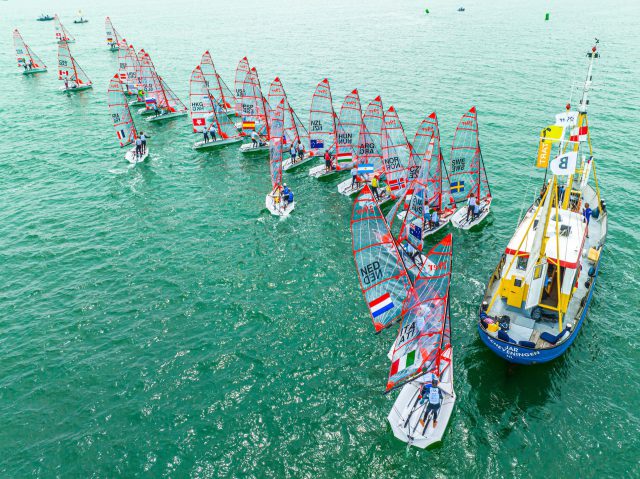 No races for the FormulaKite Female fleet, but one very light airs contest for the boys.  Defending champion Max Maeder (SGP) failed to keep his board above the water in the treacherous conditions, dropping to seventh place while Riccardo Pianosi (ITA) scythed away to another race victory. This moves the Italian, last year’s silver medallist, to a two-point lead over the Singaporean. “It felt good to finish today’s race with a big gap back to second,” said Pianosi. “I feel like things are working well for me this week. The tacking in light winds is risky but the answer is to do a big angle before the tack, build the speed, and pump like crazy with your legs to stop the board touching the water.”

Pianosi is taking nothing for granted. “I didn’t finish in first position last year, Max is a very good adversary and I have a lot to do but I keep hoping and working for the next two days.” 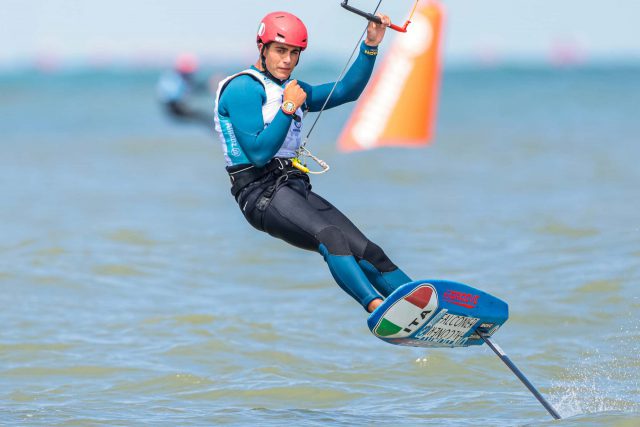 The forecast is looking stronger for Wednesday, which is just what’s needed to help get some of the fleets back on track with some more races. The strength of the current will be less of a factor if the predicted 13 knot wind arrives from the north.

For more stories, photos and results from the Youth Worlds, go to http://worldsailingywc.org